Home / Support for EA Modelling With eaDocX / Insights / Use case, package or process?

Their reactions to finding out that maybe this wasn’t the best way to structure their models was also instructive, but more of this later. First the problems.

Elements which are packages

First, the Use Cases which were packages. This is a fairly common beginners error, and usually means the modeller hasn’t quite understood what a Use Case really is: One Person, One Place, One Time. So their first model looked like this: Use-case experts will be shouting at their screens . ” How can  a Use Case be called ‘Customer Management’ – it doesn’t start with a active verb!”

So clearly these higher-level blue blobs aren’t Use Cases at all – they are groups of other use cases. But these were smart people, and they knew about functional decomposition, so this looked right to them. Then we talked about what a Use Case was, and we decided to change to something more normal:

Hopefully most people would agree that this looks more like a Use Case model should. The strange ‘use cases’ have become packages – just groups of other use cases

Packages which are elements

Now the opposite case. A process model, created by some very good BPMN process modellers, who somewhere took a wrong turn. So here the problem was reversed. They had somehow decided that there was such a lot of ‘stuff’ under ‘Configure Widgets’ that it must be a Package. That made his documents look really neat as well.

But it’s not: Configure Widgets is a Process, and should be made into an Element (a lower-level ‘thing’ in most tools, which is a child of a Package). So again, we had a chat, and decided to change to something more ‘normal’.

But it’s not: Configure Widgets is a Process, and should be made into an Element (a lower-level ‘thing’ in most tools, which is a child of a Package). So again, we had a chat, and decided to change to something more ‘normal’. 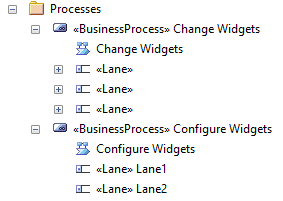 In both cases, I made the argument that it matters how models are structured. These will be viewed, used and changed (hopefully) by many people over many years, so making them conform to what most people will expect to see is really useful. In both cases, they could have happily continued modelling in their original style, and still satisfied their own projects’ needs. But future viewers would be confused So far, this is a minor modelling point, and maybe not one which you care about too much. But what made these two events memorable was the differing reactions of the two teams.

One – the Use Cases team – was very reluctant to change their model. It had been produced by several people over many weeks, and had 100’s of use cases. Changing it would be hard (it wasn’t, as it happened – we wrote a little EA script to fix it).

The other team also had lots of processes, listened to the arguments, and immediately decided to change to a more ‘normal’ style.

Now I wish I had a neat theory as to why one team was reluctant to change, and the other not. The ‘process’ team had much more modelling experience than Use Case one, so maybe they felt they understood the argument better. The Process team had already been given lots of feedback on their model, so maybe they were happier to take external suggestions: the Use Case team were blazing a trail for model-based development, so hadn’t had much external feedback.

My learning points – which I’m going have to apply to my own models 🙁   are therefore:

Putting EA at the heart of your business

Ian's workshop at the EA Global Summit on September 14th 2022

This webinar explores how our documents can display traceability information captured in EA.

This video shows how to apply Word table styles when you generate eaDocX documents from your Enterprise Architect models.

With eaDocX you can format EA Matrix Reports in Word to include additional details and formatting. Here's how

Help readers find the things that need their attention, decisions and actions, with eaDocX conditional formatting.

With eaDocX and Excel, it's easy to view, edit, create and even delete attribute/attribute links in Sparx EA.

eaDocX makes it easy to create exactly the document structure your readers need. Here's how...

Video guides on how to create quick documents with EA's leading add-on, eaDocX.

Documents in the Enterprise Architect Cloud

Producing a RACI report from data held in EA, mapping stakeholders to any project deliverables is straightforward with eaDocX.

Where to start with Enterprise Architect data modelling

What to include in your Enterprise Architect documentation

A guide to creating documents from Sparx EA models so everyone can engage with your work, project or deliverables.

Create documents to be used by non-EA users instead of model views.

Careful use of colour and shape makes models easier to digest.

The most re-used model components in Sparx Enterprise Architect.

Why is the project summary the most read element in an EA model?

Find out if you are a 'hard' or 'soft' Business Analyst.

How to Print Sparx EA Connectors

Structure your documents using the connectors in your Sparx model.